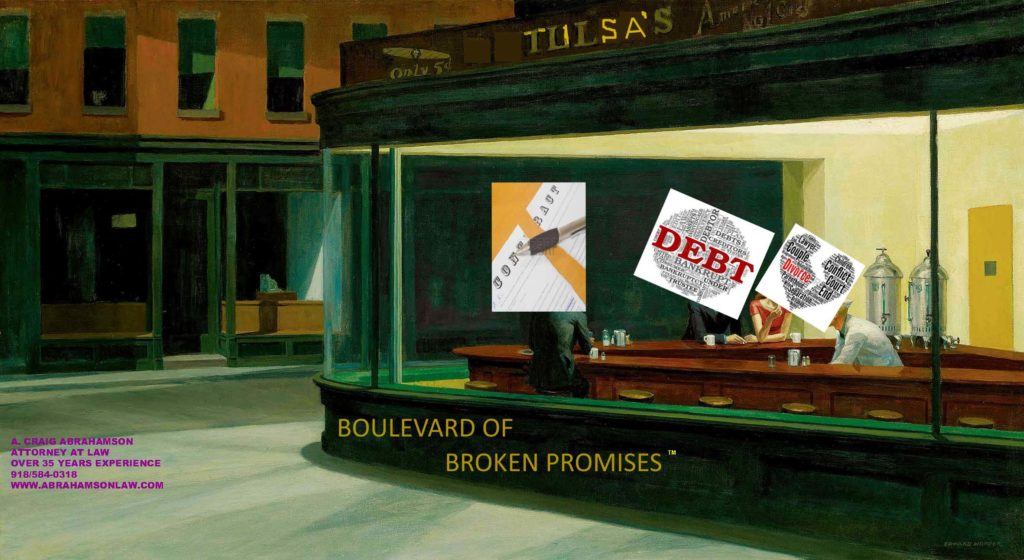 The Boulevard of Broken Promises

BOULEVARD OF BROKEN PROMISES
A unifying theme in the law practice of A. Craig Abrahamson is CONTRACTS. Mr. Abrahamson focuses his practice on contracts: negotiating them, drafting them, enforcing them and, in the cases of bankruptcy and divorce, dissolving them.

A contract is in its most general terms a bargained for exchange. It can be as tangible as an exchange of goods or services for money or as conceptual as an exchange of promises to perform or refrain from performing some action in the future. We often think of a contract as involving three elements, an offer, an acceptance, and consideration. Think of the offer as the request to make a contract, the acceptance as the agreement to do so, and the consideration as something of value to be exchanged. The degree of value the consideration is not important. Consideration can be symbolic, such as a ring at a marriage or the ubiquitous “one dollar and other good and valuable consideration” found in many business contracts. Consideration can be intangible, such as love and affection or simply a promise to do, or not do, some act.

Society places a value on contacts. We deem them worthy of devoting government resources through our courts to resolve disputes concerning their performance and breach. Our society deems most contracts should be enforced. Our courts are available to resolve disputes as to whether contracts have been properly performed, or have been breached. When one of our courts find a breach has occurred, it follows an elaborate set of statutory and case-made law to determine what remedy is available to the victim of the broken promise. However, one of the bedrock principles upon which the State of Oklahoma was founded as stated in Article 2, §13 of our Constitution is, “Imprisonment for debt is prohibited, except for the non-payment of fines and penalties imposed for the violation of law.” Accordingly, the remedy for a broken promise is usually monetary compensation, called damages. Occasionally, when monetary damages are inadequate, the court can enforce “specific performance,” which is a court order that the actual contract be carried out, or the court will carry it out itself. For example, because every parcel of real property is unique it is generally held that monetary damages is not adequate compensation for a broken promise to sell a parcel of land. Thus, if the buyer has paid the purchase price, the court can order the seller to sign and deliver the deed, or authorize the sheriff to do so instead.

Society has also determined that some broken promises should not be strictly enforced. Sometimes it is believed there must be a mechanism for people to extract themselves from promises they made but which they can’t, or choose not to, honor. Two examples of these types of broken promises are bankruptcy and divorce. Bankruptcy is available to the “honest but unfortunate debtor” who has made promises to pay money he or she finds they do not have the ability to perform. Divorce is available to married people who find they are unable (or unwilling) to keep their promise to love, cherish and remain faithful to their spouse, whether due to the fault of the other spouse – such as adultery, extreme cruelty, habitual drunkenness, etc. – or without fault – simply on account of incompatibility. In these cases, contracts are not enforced. They are dissolved, and the courts are called upon to determine (following the statutes adopted for this purpose by the legislative branch) the fair, equitable and just terms upon which the contracts should be dissolved.

Whether you are wishing to make an offer to enter a significant transaction, such as a real estate contract, business contract, or pre-nuptial contract, or you are considering accepting such an offer, A. Craig Abrahamson can help you draft your contract. If you have been the victim of a broken promise or find yourself in the position of needing a dissolution of contract in the form of bankruptcy or divorce, A. Craig Abrahamson can help you.

We will respond to your inquiry in a timely fashion. Thank you.